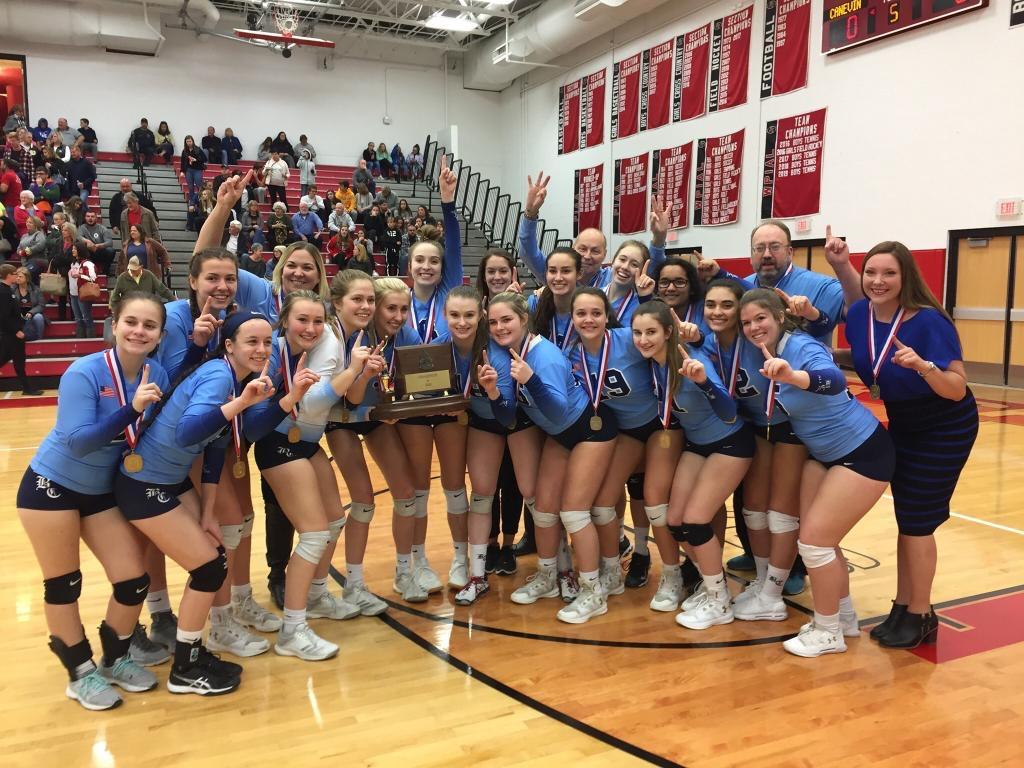 A lot of effort was needed to make a little history.

Nobody in blue felt comfortable until after a Hanna DeLisio dig kept the ball alive before the final block bounced off the hands of Kyla Hartoyo and Abbie Maziarz and hit the floor in front of the Fort Cherry libero. At that moment 16 girls ran on to the court in a group hug filled with jumping and screaming. Those actions were matched by the BC students and parents in the stands, starting a celebration that was fueled by both excitement and relief.

Bishop Canevin fought for four sets on Saturday to defeat section rival Fort Cherry to win their third straight WPIAL Class A championship 3-1 in a tense, back and forth match at Fox Chapel Area High School on Saturday. They became the fifth WPIAL volleyball team to win three straight trophies. The last time it happened was when Hopewell won four straight Class AA titles from 2002-05.

The Crusaders now move on the PIAA Class A State playoffs to face BIshop Carroll in a first round match on Tuesday. The time and location have yet to be announced by the PIAA. The Rangers will also move on to the state playoffs. They will face the defending state champion Northern Cambria Colts in the first round.

The first set started with Canevin attacking early. Two kills each from Gillian Golupski and Alexa Malloy and one from Kyla Hartoyo got the Crusaders off to an 8-3 start. After another Malloy kill the lead was up to 12-6. Then Fort Cherry came back with the first of their many runs, going for 8 points out of 9 to take a 18-15 lead. Then Canevin responded for the first time. A Golupski kill brought BC within one, and an Abbie Maziarz ace tied the set at 19. Down 23-22 after a Crusader timeout, BC scored the last three points of the set off of kills from Malloy, Abbie Maziarz and Golupski to win 25-23.

The second set started in the same back and forth manner. A missed Fort Cherry serve with BC up 8-7 started a five point BC run which after a kill and a block from Olivia Thomas had the Crusaders up by six. The lead stayed pretty comfortable until two Rangers kills got Fort Cherry within 20-17. A Malloy kill returned the serve to Canevin and Hanna DeLisio’s three service points which were ended by a block and a kill by Golupski and another block from Abbie Maziarz, jumped BC to set point. However five set points came and went before a Fort Cherry hitting error made the final score 25-22 and put BC one set away from their third straight title.

Three kills from Malloy and two from Golupski put the Crusaders up 7-4. But that was when Fort Cherry played their best volleyball of the match. They went on a 14-2 run to take control of the third set. In a role reversal, it was Canevin that held off four sets, but they could off no more as Fort Cherry won 25-20 and the match continued.

Fort Cherry’s momentum carried over to the next set as they started the set 4-0. But a missed serve and a Maddie Maziarz ace helped get BC back within one. Things got a little sloppy as Canevin missed 3 of their next 6 serves and Fort Cherry missed 4 of their next 5 serves. Two kills from Hartoyo, another Rangers missed serve and a Malloy kill put BC up 15-11. Then a shared block from Thomas and Malloy and an overpass kill from Thomas made it 19-12. Another Thomas kill and a strong DeLisio serve resulted in an Abbie Maziarz overpass kill, and the Crusaders were just four points away. After a Malloy kill and a shared block from the Maziarz sisters, the lead seemed safe.

Fort Cherry responded one more time to score five straight points before a Golupski fought through a block. Then Ana Luisa Galante went back to serve, DeLisio made a dig off a strong middle attack and the final block from Hartoyo and Abbie Maziarz ended the set at 25-20 and triggered the celebration.

Hanna DeLisio lead the defensive effort with 22 digs, her seventh match out of the last 8 with 20 more digs. She also reached a major milestone, earning her 1,000th dig. She becomes just the 5th Crusader to reach 1,000 digs. Izzy Beichner added 8 digs and Galante added 6.

NOTES: BC now has five Class A championships, that’s tied for most since Class A was established in 2000. Farrell won the first 5 Class A championships from 2000-04. They also won the Class AA title in 1999. They left the WPIAL for District 10 after 2004…This is the first time since then that a Class A team has won three straight championships…Bishop Canevin Assistant Coach Danelle Wagner was a setter on three (2002-04) of the four Hopewell teams that were the last team to win three straight…Bishop Canevin is the fifth school to win three straight WPIAL’s, four hours later, Knoch became the sixth when they beat Thomas Jefferson in 4 sets to win the Class AAA title. North Allegheny could have been the seventh, but they were upset by Canon-McMillan in 5 sets in the Class AAAA final last night, ending a 65 match win streak…Norwin, which won the first 13 WPIAL titles, and Baldwin are the other schools to accomplish the feat…Head Coach Kevin Walters has been the Canevin Head Coach for all five WPIAL titles, that total ties him for 5th on the list of WPIAL all-time head coaches championships in any class.

No Events This Week

Events are added by athletic staff.
View All Events