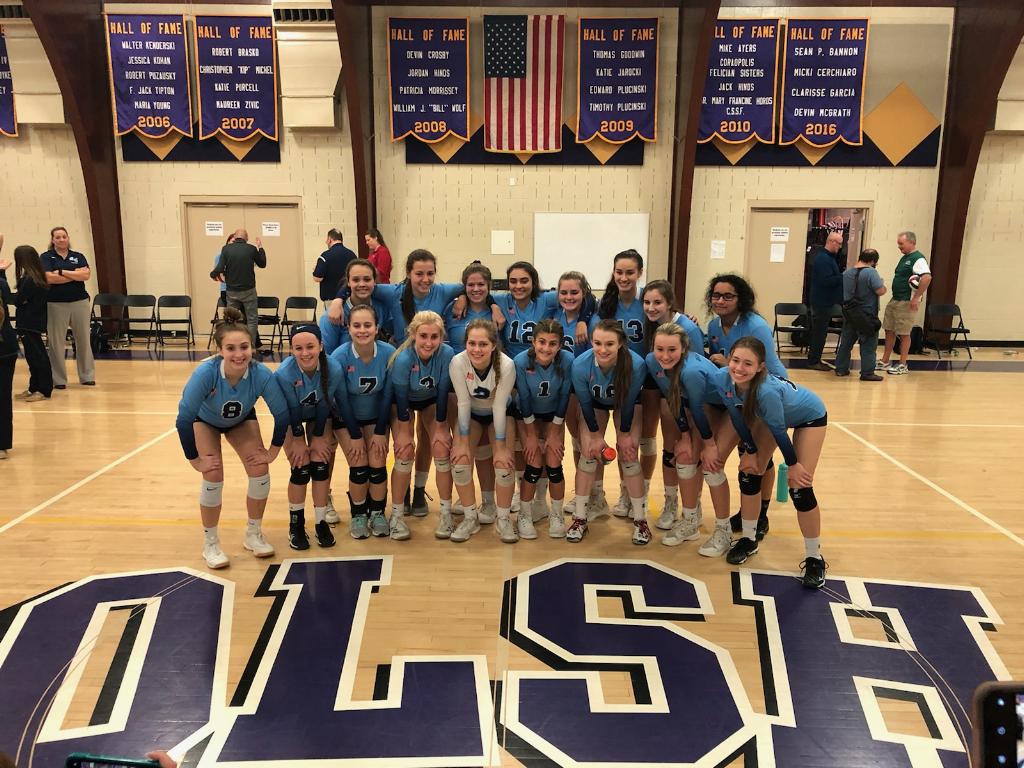 Some night’s it’s survive and advance.

This was one of those nights.

Bishop Canevin had some tough stretches, and Geibel fought hard for four sets, but in the end it was the Crusaders pulling away in the 4th set and moving on to the Class A Championship on Saturday with a 3 sets to 1 win over Geibel on Thursday night.

Canevin will face Fort Cherry in the Championship match Saturday at noon at Fox Chapel High School. This is the second straight season that the section rivals will face off in the playoffs. BC won in 5 sets in last year’s semifinal after being down two sets to none.

Most of the year, Maddie Maziarz’ serve has started BC on the right track. Tonight she recorded blocks on 3 serve receive overpasses to give Canevin a 10-6. However two more serve recieve errors helped Geibel score 5 in a row and take a lead. The rest of the set was back and forth until an Alexa Malloy block and a Gillian Golupski kill put BC up 23-20. A Malloy kill three points later finished off the set 25-21.

BC started better in the second set. An Ana Luisa Galante ace started a 5 point run and two more aces from Hanna DeLisio helped BC to a 10-3 lead, but Geibel cut the lead to 13-10. Then Maddie Maziarz put down a kill and an ace and after two kills from Malloy the Crusaders were still up but again Geibel scored 5 in a row to tie the set at 18. Geibel missed two serves that put BC up 22-21. A Maddie ace, Malloy kill and another tough Maziarz serve ended the second set 25-21.

The third set was another struggle. The serve receive hit a rough spot and Geibel jumped out 11-4. Two aces and a back row kill from Malloy got BC within 1, but 10 of Geibel’s final 14 points came from BC errors and the Gators were back in the match after a 25-21 third set win.

Canevin showed some attitude to start the fourth set. Two aces from Maddie Maziarz got things rolling. Another Galante ace and four kills from Malloy got BC out to 10-1 lead. On the next service rotation, Malloy added 2 more kills, Golupski added 1, but only when Hanna DeLisio wasn’t serving one of her 4 aces in the rotation. It was 17-3. Maddie Maziarz added one last kill and one last ace and Olivia Thomas put the set and the match away with a kill and BC advanced with a convincing 25-14 final set.

Offensively, Geibel had no answer for Alexa Malloy, who finished with 20 kills and only 3 errors. Giilian Golupski had 8 kills and Abbie Maziarz had 7. Maddie Maziarz had one of her best all-around matches as well. She pitched in 4 kills and 5 aces to go with her 37 assists. Defensively her four blocks kept BC in front for the first set and also recorded 15 digs. Hanna DeLisio had 28 digs to go over 20 for the 5th time in her last 6 matches, and added 6 aces and even 2 kills on the night. Ana Luisa Galante added 3 aces and served tough all night as the Crusaders scored 20 points on her serve to lead the team by a wide margin.

Bishop Canevin is now 19-2 on the season and has won 18 matches in a row. Geibel drops to 15-2 and faces Shenango in the consolation match Saturday at Fox Chapel. The winner of that match will join the two finalists as the WPIAL’s representatives in the PIAA state playoffs, which start on Tuesday.

NOTES: This will be Bishop Canevin’s 7th straight appearance in the WPIAL Class A final and 8th appearance in the last 9 seasons. BC has won the last 2 championships and 4 titles overall in the last 6 seasons…This is Fort Cherry’s first apprearance in the final….This was the 11th straight WPIAL playoff win for BC, a school record…During those 11 playoff matches Canevin has won 33 sets and lost only 4. Those four set losses have all come on Halloween, 1 set this year to Geibel, 2 sets last year to Fort Cherry, and 1 set to BCCS in 2017.

No Events This Week

Events are added by athletic staff.
View All Events