Bishop Canevin Junior Bowler Mike Smith had a strong third game on Wednesday to jump to a 10th place finish in the Boys Individual WPIBL Championships, held at Sims Lanes in Beaver Falls.  Smith has also qualified for the Western Regional Finals, the final qualifier for the state tournament.

Smith was in the middle of the pack of the 113 compettitors after his first two games.  He rolled a 157 and 190 in those games.  However, his third and final game was the difference maker for Smith.  He rolled a 253 in his final game.  That score was the second highest game rolled in the nearly 350 games rolled at Wednesday’s championships.  That game helped Smith jump over 40 places to his 10th place finish.
Up next for Smith is the Western Regional Finals next week.  Up today are the Girls WPIBL Individual Championships.  Two Bishop Canevin Bowlers will represent the team in today’s championships at Wildlife Lanes in Lower Burrell.  Spencer Putnam and Alysha Cutri qualified with their regular season performances.  Putnam lead the Southwest Division with a 157 average over the regular season.  Cutri was 5th in the section with a 149 average. 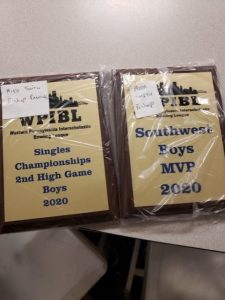